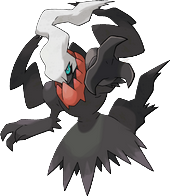 THIS QUEST IS OUTDATED AND WAS USED IN 2017, THE HALLOWEEN QUEST THAT PERMIT TO GET DARKRAI IN 2019 HAS ABSOLUTELY NOTHING TO DO WITH THIS AND IS TOTALLY DIFFERENT.

One had to interact with Mummy Pharais, located in Vermilion, Olivine, Slateport and Canalave to get to Halloween event's exclusive area. One had to be the region's Champion in order to be able to go to Murky Town.

Once there, one had to gather 10 Halloween Candies that will prove being useful later on the quest, by interacting with ten of the NPCs around in town. Then, one had to find 3 good spirits randomly found among 9 overall, in order to free the 3 ghosts who blocked the path to Unison Mountain. Then, one had to challenge one of the two following Mayors: Camelia of Serenia Village, or Vlad of Dreadtown, depending on the village they chose to fight for, at the start of the quest.
The Halloween Candies were here used to be able to access these two villages. Lastly, one had to defeat the third Mayor, Gorge, who, tainted by his dark motives, used Giratina to send everyone into the Distortion World.

Once Gorge defeated and brung back to reason, one had to head back to Murky Town in order to claim his rewards.
Click to expand... One could only access Dreadtown House 2 from 00:00 to 02:00am, had to interact with the bed in there and would wake up at Dream Island; there, one could get a

masterball and try to catch Registeel: East of Fortree City on Route 120 in the Ancient Tomb

Regice: Route 105 in the Island Cave

Regirock: South of Route 111 Desert in the Desert Ruins

1. Go to Trainers Valley Cave which is South of Trainer's Valley.

2. Speak to Apo and he will ask for 3 Elemental Monkeys (Panpour, Pansear, Pansage) with Your OT and Total IVs Greater than 90.

After beating him, he will give you access to Monkey Path.

1. Each Regi has a respective key that can be acquired in each location.
Registeel: East of Fortree City on Route 120 in the Ancient Tomb

Regice: Route 105 in the Island Cave

2. In each location, there will be a ruin maniac. Speak to him and he will ask you to find 3 relics.

3. After finding the 3 relics, speak to the maniac again and he will give you the key.
You can change your key by talking to the Ruin Maniac of your desired Regi after finding the relics.
Do note that the key that you choose will determine the Regi that you get.
You cannot swap after submitting your key to the Golem Guardian.

1. Talk to the Ruins Keeper found North-East of Monkey Path.
She will not let you in unless you meet all the requirements.

2. Once inside, there will be statues that correspond to a letter.
You have to spell out a word based on your chosen Regi.
Registeel: S-T-E-E-L
Regice: I-C-E
Regirock: R-O-C-K

Arceus: E, K
Cresselia: E, R
Heatran: L, C
Shaymin: T, O
Zapdos: S, I
3. Afterwards, a Golem Guardian will appear and you will have to give him your key.
Registeel: North-East of the Underground Ruins

Regice: North of the Underground Ruins

Regirock: North-West of the Underground Ruins

4. You are then free to enter the Tomb and capture your Regi!
These pokemon are sync-able to so be sure to get your Synchronize Pokemon First.

Hope this has helped you in capturing your desired Regi!
Have a great day. Much love! 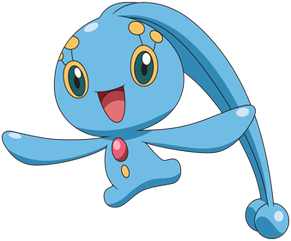 Hoenn Champion
Be able to travel between regions
Click to expand... 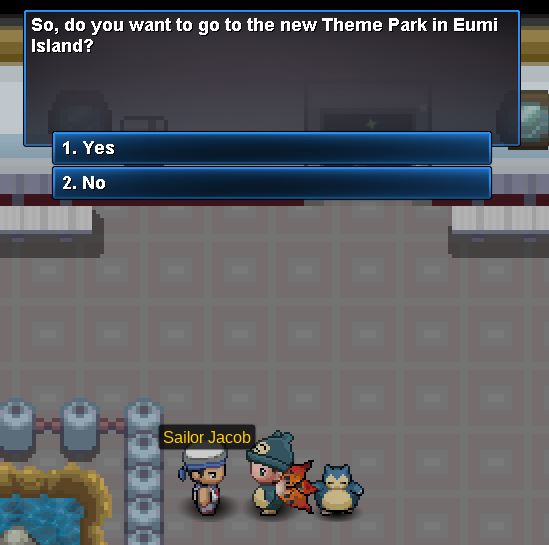 Once you reach Eumi Island Town, head north into Eumi Island Theme Park 1. When you will try to go deeper into the theme park, the receptionist will stop you saying that they are experiencing blackouts and that Wattson reported that there are problems in New Mauville. 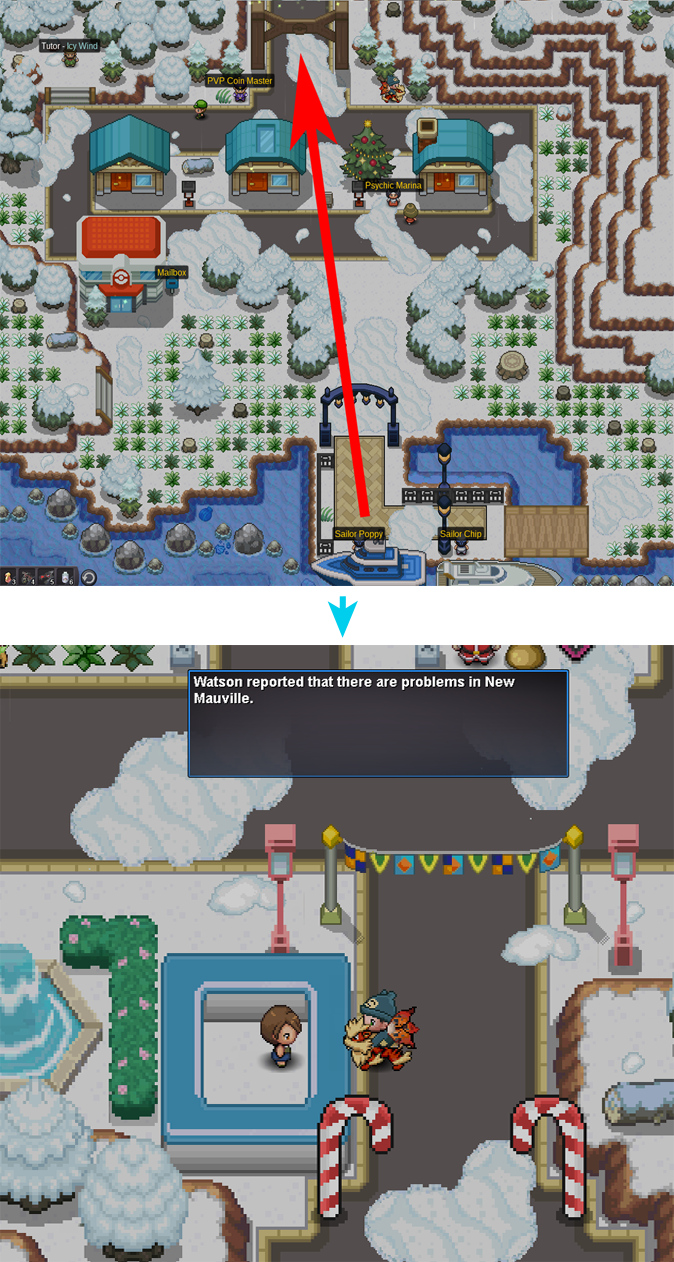 From there, head back to the ports, sail back to Lilycove City and head to New Mauville, which can be reached by surfing south-east of Mauville City.
Once you are in front of New Mauville, interact with the Officer Shamac and Wattson.

After you've talked with both Officer Shamac and Wattson, head back to Lilycove City
Click to expand...

Once you are back in Lilycove City, head east until you arrive in front of a black ship and enter it. 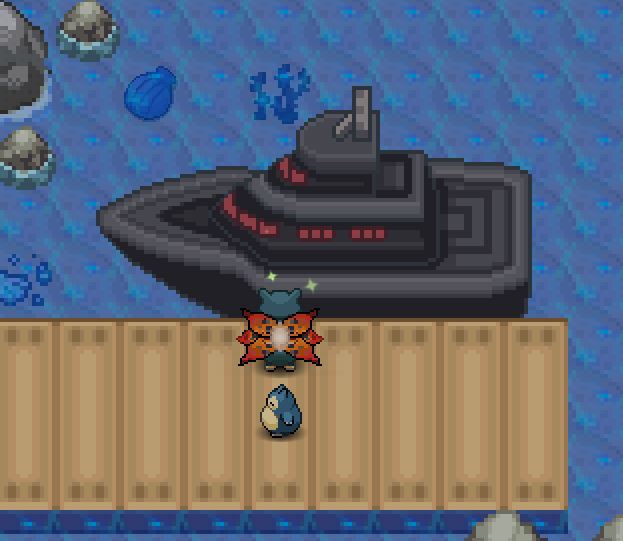 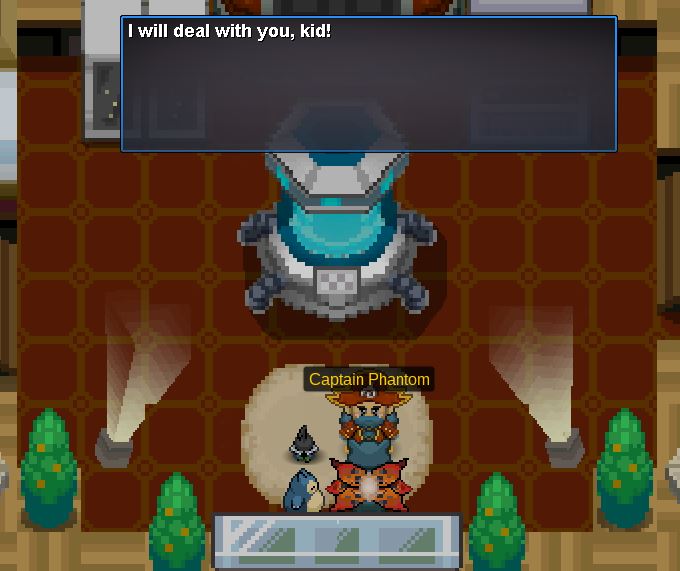 Once you've defeated the Captain, he will give you back the machine part. From there, head back to New Mauville and interact with the Officer Shamac and Wattson. 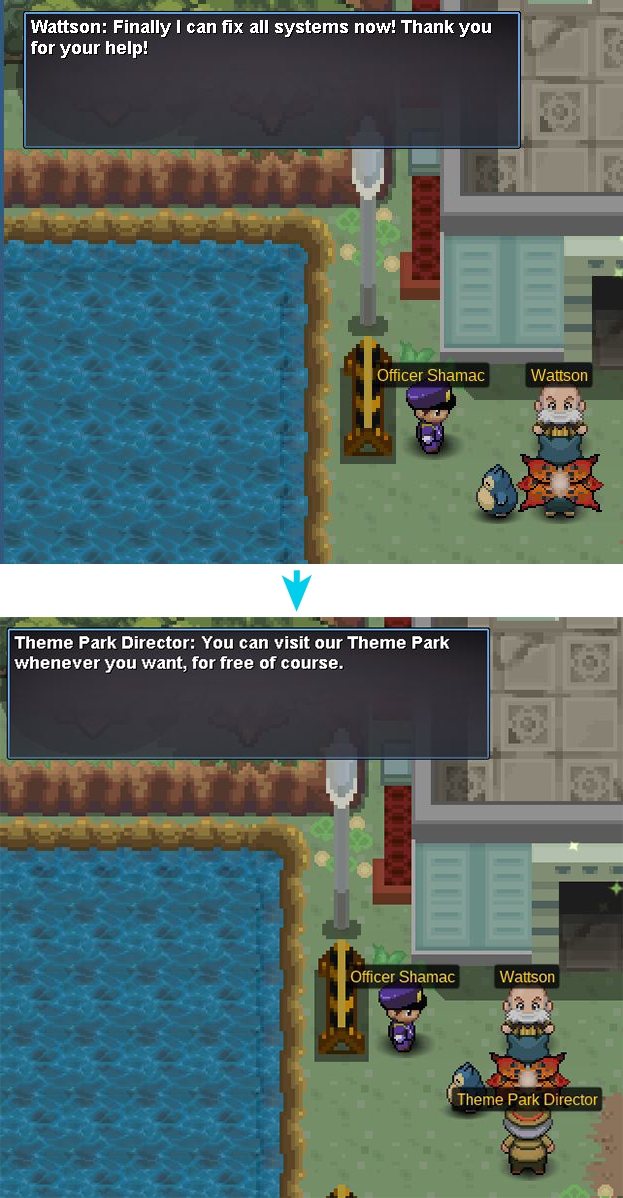 Once you are in Eumi Island Theme Park 1, head to east until you will reach Eumi Island Theme Park 3.
Once there, interact with the NPC Lyzabeth and she will show you Manaphy in its Egg Form. After that, the Captain Phantom will appear, steal the Manaphy Egg and a member of his crew will battle you.
His Pokémon have a level around 60 and are: Arcanine - Dusknoir

Defeat the grunt, talk with Lyzabeth and follow her to the Eumi Island Temple to help her retrieving Manaphy. 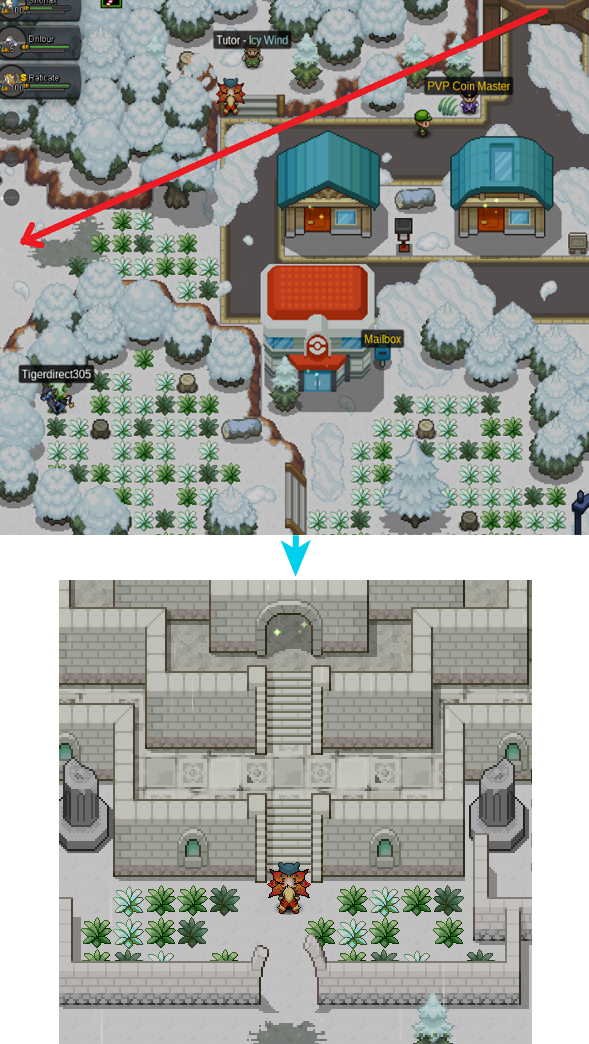 Once you are in the temple, interact with NPC Jyle and all the other NPCs will appear. 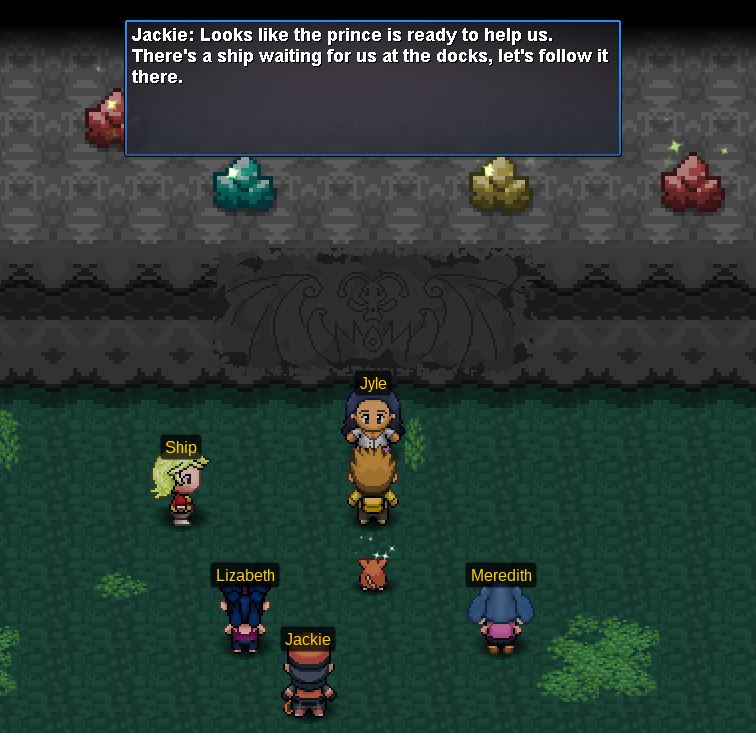 From the temple, head back to Eumi Island Town and go to the dock.
Once there, interact with Sailor Chip and head to the Temple of the Sea. 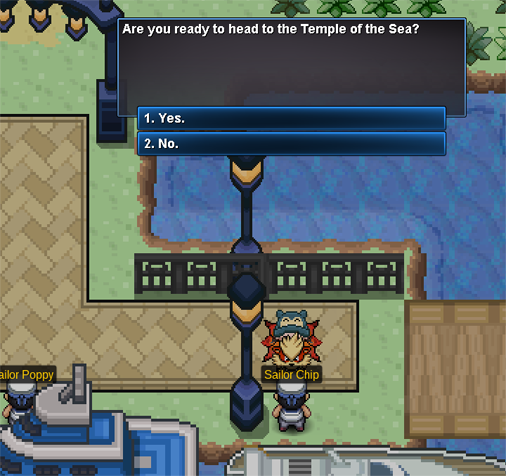 When you arrive at the Temple of the Sea, interact with all the NPCs. 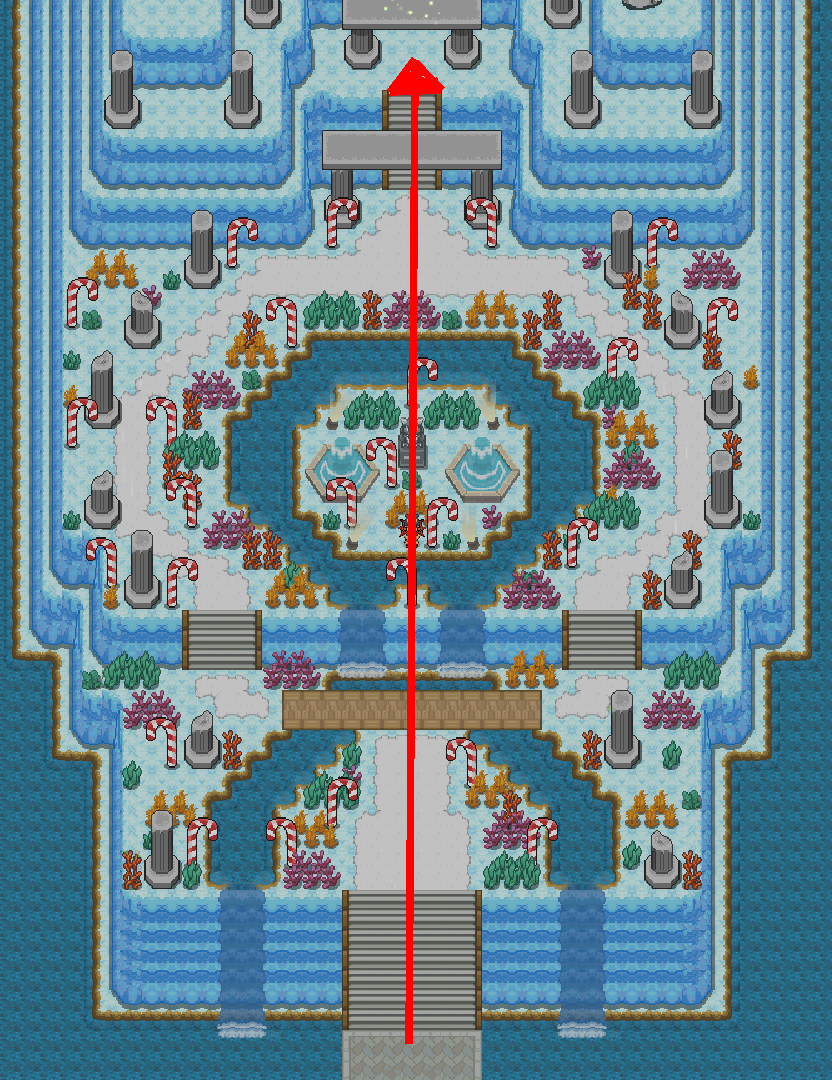 After that, head north until you reach the Temple of the Sea Ground.
From there, interact with the NPC, head north and defeat all the captain phantoms grunts. The average level of the Pokémon is 85.
Once all the grunts have been defeated, head north, take the teleport pads and the Captain Phantom will appear to fight you. 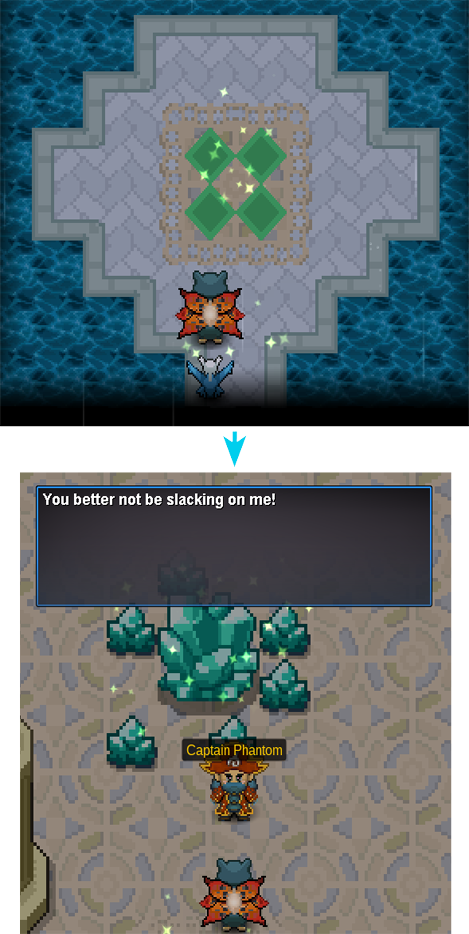 He has a team of 5 level100 Pokémon: Chatot - Pinsir - Dustox - Beedrill - Typhlosion

Once you have defeated the Captain Phantom, the temple will start flooding and you have to escape. 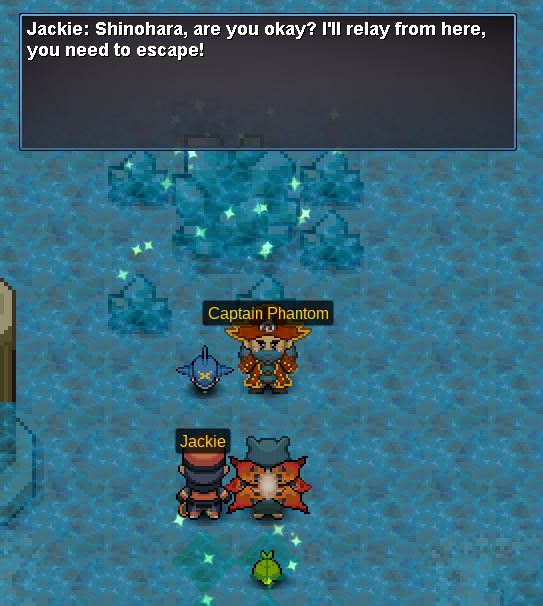 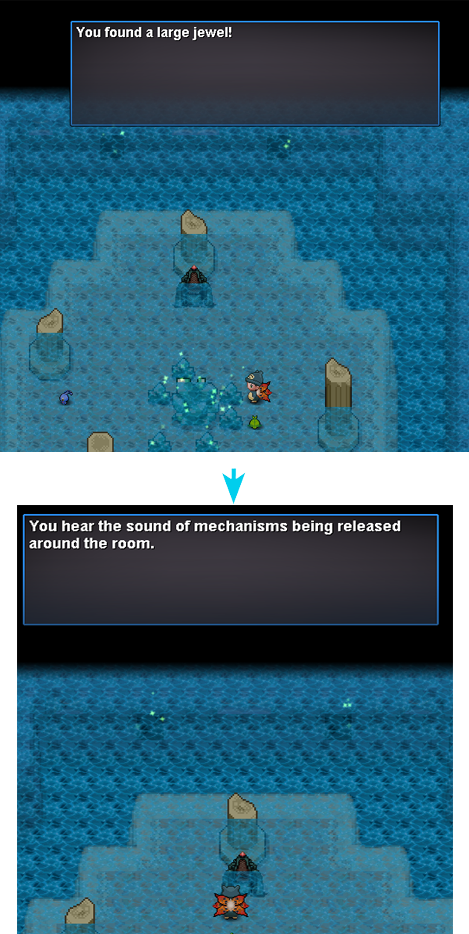 Once you've found and placed the correct Jewel, get out from the temple and head south until you find Lizabeth and her friends and talk to them.
They will tell you that Manaphy's home is the temple and that it will go back there waiting for us. 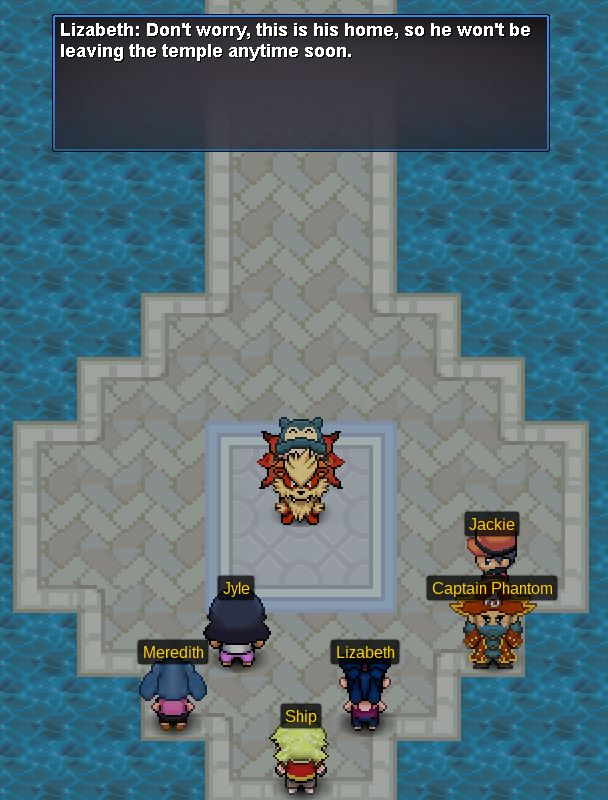 From there, go back another time into the Temple and reach the center of the map where you can find Manaphy ready to battle.
Do note that you can go back to take your synchronize Pokemon before fighting Manaphy. In order to do that, simply talk to the Sailor and you will get teleported back to Eumi Island Town. 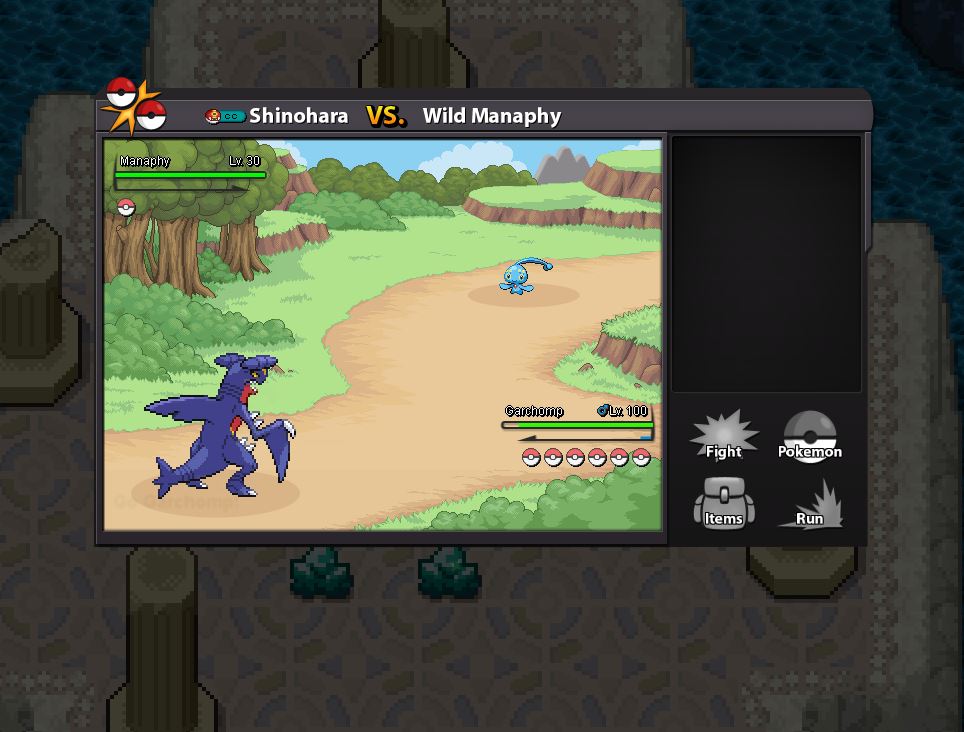 Can I synchronize Manaphy?
Yes, you can synchronize Mampahy.
You can go back to take your synchronize Pokemon before fighting Manaphy. In order to do that, simply talk to the Sailor and you will get teleported back to Eumi Island Town.

How can I get the Xmas Manaphy?
The Xmas version of Manaphy was avaialble only from 27th Dcember 2018 to 16th January 2019.
Therefore, it is not possible anymore to obtain it.​
Click to expand...

To start the quest, you must speak to Sailor Sam located at the Vermilion dock.

When you arrive at the Shamouti Island, you must head to the Shamouti Festival Hall and speak to Melody. She will ask for help.

You now need to prepare a pokemon with the ability Cloud Nine to clear out the storm and proceed to the next map.

If you clear out the storm once, the storm will be cleared forever

If you finish clearing the storm, you should head to the Pokecenter and bring a monotype team of 6 Fire type pokemons to battle the Fire Elder.

Dual types are allowed. For example infernape, which is a fire and fighting pokemon.

There are no level nor OT requirement to battle the Fire Elder
Click to expand...

Head north on Shamouti Island and head to Shamouti Seaway.

You now have to battle the Fire Elder, located at the Fire Island. His uses Torkoal, Charizard, Infernape, Alolan Marowak, Volcarona and Talonflame.

If you defeat the Fire Elder, he will hand you the Fire Orb.

You have to visit the Pokecenter and prepare for the next boss.

Head back to Seaway Vein, interact with Moltres and Zapdos and you'll be automatically transported to the Collector's Airship.

After defeating Moltres and Zapdos, the Airship will crash and you'll land on Lightning Island. Speak to the two Lightning Sage on the map.

Find the Lightning Orb from the crashed Airship.

If you find the Lightning Orb, Melody will appear and transport you back to Shamouti Island.

You now need to prepare a pokemon with the ability Shadow Tag and head to Ice Island.

If you need to catch a pokemon with the ability Shadow Tag, you have to talk to the Slowking at Shamouti Island to leave the Island.

Once you arrived at Ice Island, speak to Ice Sage and agree to help.

Walk up to the Articuno, your Shadow Tag pokemon will prevent Articuno from escaping. Defeat the bird to obtain the Ice Orb.

Speak to Melody at Shamouti Island and hand over the three Orbs. She will play the song of Lugia and calm down the storm. The island will now return normal.

After the island being normal again, Lugia will appear behind Melody. Talk to Lugia and you'll be able to obtain a Silver Wing behind.

You can't activate all three tasks at once. You can activate the next Elder's task if you finish the previous Elder's task.

You can choose the order of the Elder. However be aware that the tasks become harder as you proceed.

The following baby pokemons have to be caught after activating the task talking to the repective Elders
Click to expand...

Q: Are the Legendary Birds banned in Ranked PvP?
A: Nope, they can be used.

Q: Can you catch the Legendary Birds in shiny form?
A: Nope, they are shiny locked.
Click to expand...

I would like to specially thank @Aspheric, @Siberius, @Yamette, @Magicgaurd and @Firekeeper for helping me throughout making this guide :)
Click to expand...