- IGN: Coeur
- Discord name: Coeur#2614
- Pokemon name: Volcanite
- Pokemon Typing: Fire/Dragon
- Pokemon description: This baby dragon lives in the heart of the still active volcanoes. The stone that he carries on his head is made of a rare material from which he draws his powers.
- Picture/drawing (optional):

IGN: Krazirussian
Discord: Mr.Bluntski#6257
Pokemon name: 1st evolution - Fraei (dragon type), 2nd evolution - Drozairy (dragon/fairy type)
Its a very elegant pokemon and very proud of its beauty that's why it evolves when maximum beauty has been reached. Even though its a smallest dragon type pokemon, its fearlessness still allows it to battle biggest dragon types in the Drake Valley where you can find all kinds of dragon type pokemon. It has high spacial attack and special defense, medium speed, low attack and defense. Its special move is star shine (acquired upon evolution) which boosts its special defense and reduces opponents accuracy since its fairy type its affect get boosted against dragon, fighting and dark type pokemon that makes them take damage every turn when drozairy's ability is fairy dance. On the other hand if fire,poison, steel pokemon hit with star shine they will heal from it each turn. Drozairy's hidden ability is fairy power which boosts its special attack by 1 stage each time fairy type move takes down an opponent. Its first evoluion ability is fairy barrier so each time it is hit by super effective move its special defense goes up by 1 stage. To sum it up Fraei abilities ( fairy berreir/h.a. : fairy power), Drozairy abilities (fairy dance/ h.a. : fairy power).

- IGN: Digsmen
- Discord name: Digassmen#7660
- Pokemon name: Voltchan
- Pokemon Typing: Fighting/Electric
- Pokemon description: A fighter who can really put his fists to use with some charge associated with it. Birds will have a greater difficulty to mess with him, modern problems require modern solutions and Hitmonchan and Voltorb put their minds to it and adapted. (Voltorb + Hitmonchan)
- Picture/drawing (optional):

(Drew it myself in 2013, inspired in the famous pokemon generator)
V

- IGN: Nuera
- Discord Name: Nuera
- Pokemon Name: Cottonaughty
- Pokemon Type: Fairy//Poison
- Pokemon description:
This pokemon is the gentle buds to the ears of every trainer. A very good companion. Refreshing and soothing in the ears.
But beware, every good side has bad side. As the battle prolongs and stress builds up on the hands of Cottonaughty, smelly and sticky den will end up touching different parts of your body. There is a saying "Once a fairy, now a naughty".
- Picture:

IGN: Mrvash
Discord Name: Rufus
Pokemon Name: Citrousta
Pokemon Type: Psychic / Grass
Pokemon Description: Citrousta, the citrus pokemon. This pokemon can be found in the cities meddling with people's food. They may seem to be harmless but they are skillful with their hair like pasta which they use for strangling oppenents if they come too close and secrete juice unto their eyes.
Picture/Drawing:

- IGN: XxhuhuxX
- Discord Name: Son#9763
- Pokemon Name: EasMatryoshka ( idea from event Easter and doll Matryoshka - russia)
- Pokemon Type: Fairy
- Pokemon description:
Ability: baby doll - damage taken from attacks is reduced by 30% when it full hp. But when hp less than 50% damage taken from attacks is increased by 50%.
H: 0.6m W: 16kg
This pokemon is not an individual but it is a family hidden inside a leader. 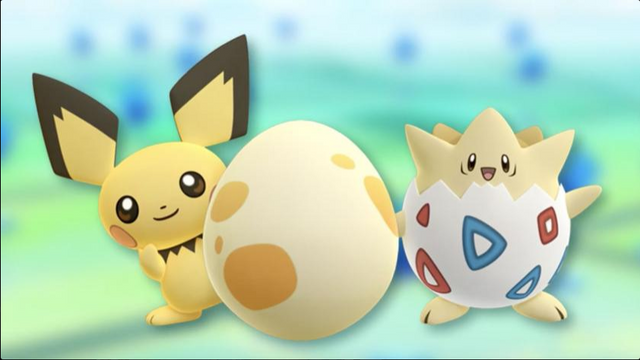 Hey Everybody! We're pleased to announce a new event for Easter!
We have decided to kindle the creative juices on our players during this event.
Don't forget to have fun and enjoy during this event!

- This event will require the players to make a new pokemon and give the pokemon their own name and personalities.
- It could be the evolved form of an existing pokemon or a whole new pokemon!
- The Pokémon which are most unique and creative will win the contest.
- Pictures or drawings are not mandatory but it helps in explaining the pokemon better. It DOES NOT give extra points.
- Registration ends on 4th of May.

- The Pokemon must be one-of-a-kind and your own innovative idea.
- Do not post off-topic comments, they will be deleted.
- You can enter in 1 account per person.

Submissions that do not comply to the rules will be disqualified.

Birthplace:
This extremely rare pokemon was born on a stormy night when lighting struck a very uncommon gemstone called, Alexandrite. This exotic color-changing gemstone is known to be anywhere from a green to blue hue in daylight and a red to purple hue at candle light. Legend says this was all witnessed by a local farmer who took shelter in a nearby cave who didn't even know that kind of gemstone could be found there. Right before his eyes, the gemstone rapidly was changing colors as it barely levitated into the air. Another lighting bolt struck from the heaven hit the gemstone once more transforming it into a human boy. The farmer couldn't believe it. He even pinched himself a couple times to see if he was dreaming. He carefully walked up to the boy and at once he opened his eyes. One eye was highlighter green while the other was purple as a island sunset, altogether it really complemented the black hair curly hair and the sun-kissed skin he had. He asked the boy what his name was, but all he did was give him a blank stare. Reminiscing the events that happened all at once, he farmer called the boy Aledrite.

Appearance:
The Aledrite’s trueform is a glowing green-blue gemstone that levitates leaving a sheer dust of golden light as it moves. Somehow has he the ability to take the form of a human boy majority of the time and only rarely he goes back to his trueform. The farmer lent him overalls, hand woven sandals and a sunhat for clothing.

Abilities:
There was a time where the farmer had all his crops destroyed by a herd of wild Tauros which was really odd since that was the first time it's ever happened. He was really frustrated and Aledite who playing nearby went into the field happening to witness everything that happened. Aledrite closed his eyes and clasped his hands tightly together as if he were praying and all the farmer's crops was restored magically at once. It was a miracle that day and Aledrite slept for the entire day.

Another time Aledrite was having a nightmare one night and right outside of the farmer’s house lightning bolts from the sky where being struck all around the perimeter of the house, but not directly really puzzling the farmer. Once he found out Aledrite was having a nightmare, he quickly woke him up and the lightning immediately ceased. Occasionally, Aledrite likes to play with the electrical sockets by sticking his finger in and out and literally making all of the lights in the house flash like it's some kind of rave party. Having Aledrite around has its ups and downs, but the farmer really treasured his company.

Quoted by farmer: “He's the most beautiful and kind-hearted Pokemon I've seen. Full of life and loves playing with the other kids on the countryside. One day he told me he had to go and will be back very soon. It's been a decade since then and there was not a day when I haven't thought about him,”
Last edited: Apr 23, 2019

Flarex, the Flame Brute Pokemon. It lives in mountainous territories where it hunts for Lairon. When in battle the braces on their arms, legs and tail will ignite to enhance their fire power.

Overall Description: Flarex is a bipedal reptilian Pokemon that lives in mountainous/volcanic regions, the last evolution of the Pyramy Line ( Pyramy --> Igneaur ---> Flarex). It is a red-orange Pokemon with several plates of armor on its body (head, spine, arms, wrists, belly, thighs, ankles and tail) as a means of defense and attack. When provoked, challenged, hunting, etc. it will ignite its bracers to enhance its fire attacks. Due to its large size it is relatively slow, but makes up for its speed with strength and endurance.

Flarex average at about 6'0 ft with no gender differences. Males will compete for space, food and mates. Flarex maintains its armored body parts by hunting down Lairons, and the iron in their bodies help contribute to keeping its armor pristine. Couples will mate for life, and have been recorded to take down Aggrons together when rearing young.