Finished Probability for IVs on PRO

As we can notice, it’s very hard a find an epic PKM: Have the right ability, have the right nature, and have epic IVs. The concept of epic depends of each person, we don’t have the same perception of what PKM is epic or not. We have an idea of the probability to find one PKM with the rarity tiers (it’s not precise sadly), we know the probability for ability (H.A. = 5%), we all use Synchronize to find the right nature with 50% probability, but nobody did a guide about the probability for IVs. So, I decided to post two methods to apprehend the rarity of different PKM based on IVs. It’s not really a guide, there is no method to have better IVs on PKM, and my post will not give the answer to the big question: “Is my PKM epic?”. All my guide is only one indicator of rarity.

IVs means Individual Value, you can find it on your PKM in orange : 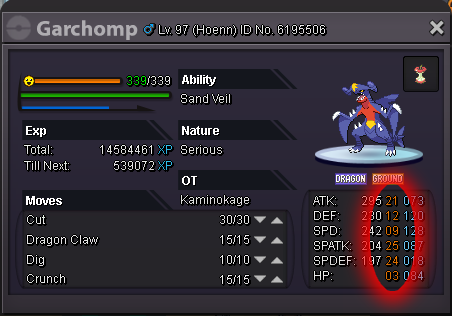 ​
IVs are predefined values from 1 to 31, they are random generated when you engage a PKM in the wild. You can’t change it, a PKM born and die with his IVs.
With a value from 1 to 31 in the 6 different statistics, there are 31^6 = 887 503 681 combinations of IVs. It means every PKM is almost unique for his IVs.
Other interesting fact: the combination 31 in each stats has a probability of 1 / 887 503 681. And the sum of the ID PKM for Red, Blue and Yellow Server is around 50m, so we are not even close to find one perfect PKM in IVs :devil:


What is the point to have “good” IVs?

The all point to have “good” IVs is to have better stats for fight. You can see the formula to calculate the statistic of a PKM :

​
Formula from https://bulbapedia.bulbagarden.net/wiki/Statistic​
I will take an example with the statistic ATK for a PKM lv 100 with 80 Base Stat (average of Base Stat), 252 EV and Adamant nature: [/B]

To resume, having goods IVs in each stats can help in fight, but the influence is not huge. So, you don’t need the perfect IVs on your PKM, you just need to have correct IVs.

I will base this part of the guide on the majority of PKM : for a lot of PKM, one statistic is useless.
An example: Imagine, I don’t like this Scyther, his ability and nature are perfect, but his IVs seems bad for me. I don’t care about having 31 in ATK and SPD, I just want have a TOTAL 5 IVs = 120 at least. But, before I chase one with this TOTAL 5 IVs, I want to estimate how much time I will take to chase it. So, I need to calculate the probability to have at least a TOTAL 5 IVs = 120.


How can I calculate it?

The IVs are randomly generate like dices, it’s as if I have 5 dices with 31 sides and I want the number of time I can have the sum 120 for this dices.
The probability is determinate by this formula:


What is the point to know this?

The TOTAL 5 IVs is one indicator of rarity, it will no help to chase better IVs, you can be lucky and find it in first try or catch 500 before have it. But, it’s a tool for decision-making: Should I buy or chase? The TOTAL 5 IVs gives you a view of how much time you will take for chase a PKM, and help you determinate the price you can pay for buying a PKM.

It can be also a tool for chasing a PKM: for a PKM rarity tiers 1, it’s easy to catch a lot, so for a first selective sorting of your catches, you can decide what percentage of PKM you will release before looking in specifics IVs.
For example : I will keep only the 10% better PKM in TOTAL 5 IVs, the 10% matches to TOTAL 5 IVs = 107. So, I will release all PKM under this sum and only after I will look in specifics IVs. Because even if a Scyther has 31 in ATK and SPD, with TOTAL 5 IVs = 107, he will have only 45 in the rest of his stats.

The TOTAL 5 IVs has a big disadvantage, this method doesn’t take into account specifics stats. Two PKM can have the same TOTAL 5 IVs, but one can have 31 in a vital statistic when the other PKM will have 1. It’s up to you to use your brain after using the method x) 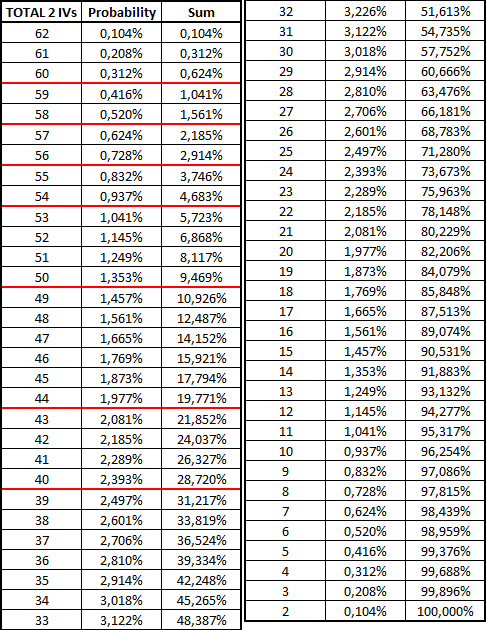 I share the Excel i used, so you can use it too.
You can download it with this link:
https://www.dropbox.com/s/e4dvjolkk5p1b26/PROBABILITY IVS.xlsx?dl=0
In the right top, you can click on download. If something is wrong with the Excel or the uploader, tell me.

As we saw previously, the TOTAL 5 IVs doesn’t take into account specifics stats, so another method exist to evaluate one PKM. You can calculate directly the probability for specifics IVs.
The formula is :

​
This formula is good if you want to use the 6 IVs to calculate your probability, but if you want only 5 IVs (for example: Scyther again), you can remove the part with the useless stats (SPATK for Scyther). This easy remove is explain because you don’t care about your SPATK, you can have 1 or 31 it’s the same: if IVs SPATK = 1, so (32-1)/31 = 1, and multiply by 1 changes nothing to the probability x)

I will take an example of using this method:

Same than before, I want a Scyther, but this time I want in IVs:

I calculate his probability:


This method seems nice, but it has disadvantage too. You can’t use it for evaluate the value of your PKM. This method is too much selective. I will take another example to explain it:

​
My dear Scyther, again, if I calculate his IVs Proba with this method I obtain: 14,6894%
This result seems absurd, it would mean 85,32% of Scyther are worse than him. It’s because, with this method, only better IVs than 17 in HP are selected. A lot of part of Scyther are deleted without taking care of the rest of his IVs.


You can find in my Excel a Calculator for this IVs Proba.

Thanks you for reading, if you see some errors or want to add an other method (or something else) to this post, don't hesitate to contact me :)
And sorry for my english, it's not my native language :(
Last edited: Jan 8, 2020

Re: Probability for IVs in PRO

I cant understand it fully.
Please explain it easily.

It was the easy way :Frown:
But i will try to resume it.

I created two methods to determinate the probability to have one PKM with some IVs. The main constraint being that each combination of IVs is almost unique, each combination has a probability of 1/887 503 681, from there, it"s impossible to deduce anything from it. But on a global reasoning, it becomes easier to calculate probabilities.

The method 1: TOTAL 5 IVs will take only the sum of IVs on the 5 useful statistics, on my example, i took a Scyther Adamant, the useless statistic will be the SPATK, so i do the sum of his 5 others statistics. When i have this sum, i can calculate the probability associated with this sum :

If someone finds a method much closer to reality, i will be happy to read it :y:

My old uploader for pictures was close, so all pictures were deleted. Hopefully, i still had this pictures.

Update :
- Re-upload all pictures.
- Added my Calculator i made : http://fsogame.free.fr/tools/calct5ivs.php

This is truly a masterpiece, well written for players with some knowledge.
Thank you sir.

Once again, my picture uploader closed, so i reuploaded all pictures, hope it's the last time, pray for Gyazo to stay alive for a long time xD